In short, printing a 3D object directly will be much easier. Photoshop will allow us to create, edit and print our three-dimensional model on a 3D printer

Until recently, making a 3D impression of a three-dimensional object was just a matter of money, but with the generalization of 3d printers of domestic use and price moderation, printing 3D objects is now much easier and more affordable for any pocket. However, in this process of normalizing 3D printing we find interesting initiatives such as the integration of 3D printing with Photoshopso that users of this popular Adobe software can edit three-dimensional objects and print them directly on a 3D printer.

Until now, to print a three-dimensional object on a 3D printer, it was necessary to import the file created into the different existing applications to prepare the model for printing. That is why the creators of the well-known graphic design and image editing program have developed a 3D printing plugin completely built in interface of the program that will allow Adobe Creative Cloud subscribers immediate access to the 3D printing features.


As recently announced at a press conference by the company’s product manager, Andy Lautawith the integration of 3D printing functions in the platform of Adobe’s flagship program, it is expected to bring together the design process of a 3D object in the same program to simplify the direct printing process.

Bearing in mind that the vast majority of software 3d design only supports printing on monochrome modethe new Adobe application allows you to use all the graphic potential of Photoshop to obtain much more creative results from the point of view of colour and the texture of the object. With the integration of this new tool, its creators also intend to put an end to the problem of incompatibility of 3D meshes that many designers suffer when printing their three-dimensional models on a 3D printer.

In the same way, the program incorporates new functionalities, such as the possibility of being able to preview the object before being printed, in order to evaluate the final result and the auxiliary support structures that it will have during the printing process. Thus, once the object has been verified, users can export the model to publish directly to Sketchfab or send it to a printer that supports direct printing, such as MakerBot either 3D System Cube. At the same time, Photoshop users will also be able to print direct their models in Shapeways. 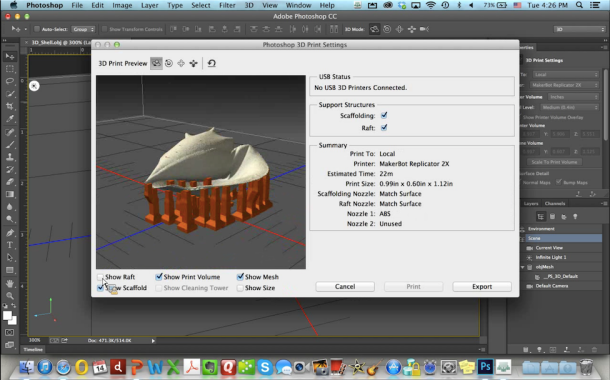 This new Photoshop tool, which will be launched in a few days, is expected to have a direct impact on 1.4 million users subscribed to Creative Cloud. With the integration of this feature, users are expected to make much more creative use of their 3D models, paving the way for the necessary democratization of 3D printing technology.

How to save masked image in photoshop

How to copy shapes in photoshop

How to unmerge the layers in photoshop

How do you photoshop yourself into a picture

How to merge two photos in photoshop cs3

Quick Answer: How to add shapes in photoshop cc